Warning: This phone's OS contains trial games, i.e. they have a "Buy" option in their menus. I can refrain, and I don't know if and how it would even work if clicked, but this is definitely a damper, e.g. if one plans to give this phone to a child.

New for 35€. I happened to still have a 2GB MicroSD card lying around, and put it in there.
And a SIM card of course.
Charging and connection to the computer via USB (not C, but the slightly older - MicroUSB I think).
It has a headphone plug, can play MP3s (and MP3s only) and an FM Radio.
The hardware makes a sturdy impression. Real buttons, how I have longed for this!
Speaker volume is good, I can hear my conversation partner as well as the ringtones, loud and not distorted, not too tinny.

This just works. And it does only GSM. No WiFi. No internet. There's some bluetooth but I never use it - hopefully it really is off, no sneakiness from the OS.

[However, I have since learned that GSM is the same as 2G which means that the phone is theoretically mobile internet capable.]

The operating system is Series 30+ (that article also describes the tribulations of the Nokia brand over the past decade or so). It boots in just a few seconds.

I can export my current address book (with phone numbers, names, email addresses etc.) as a single .vcf document, and move it to the phone's SD card's root directory with the exact name backup.dat.
Then I can import it into the phone's contacts. It only recognizes TYPE=CELL numbers and not e.g. TYPE=HOME, which was fixed with a little search-and-replacing on backup.dat before importing it. Even so, some contacts appear empty (only a name with no number) - probably those that never had a number associated with them. 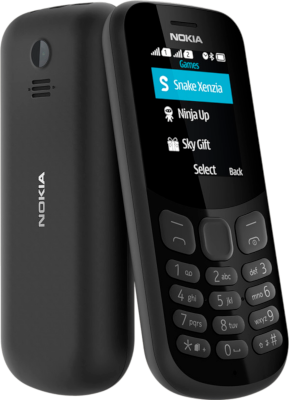 It's one of those little things I've come to appreciate about modern phones: a small but strong LED torch at no extra weight/bulk/cost. For those yearly camping trips. The Nokia 130 has a good one.

Hell Yeah! If you still remember mobile phones from before smart, you know what I'm talking about.

Do you remember typing text messages on a numerical keypad? And the dictionary they used to have for it? It works well for me.
There's a big upside for Finnish users: T9's vocabulary is much larger and better adapted to Finnish language than with any Android device's keyboard I ever used.

After some time of use I am still satisfied; there's a few quirks though.
Things like having to rewrite your whole text message because of thumbing the wrong key.
The "big OK button" sucks because it reacts to 5 (!) different inputs: up, down, left, right, and center. That is very error-prone, one has to be very precise about hitting the center and nothing else.

All in all, this feels like good ol' dumbphone days with faster hardware & present day compatibility. Maybe not quite as sturdy as an original Nokia 3310, but durable enough. And as feature-packed as possible considering the hardware.

So currently I run around with my Android phone for Internet (it has an internet-only SIM card), and this phone for calls. It adds only little extra bulk; and often I know that I will only need one of the two devices, so I can leave the other one.

Next: Part 3 - Trying to resurrect a Nokia N9