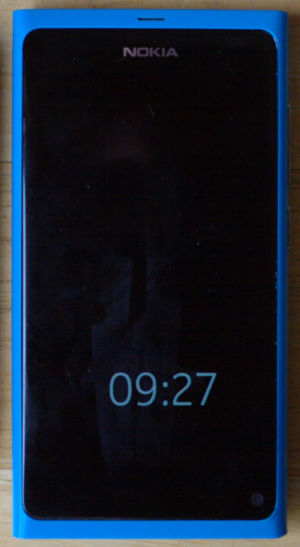 In my ongoing efforts to get rid of Android, I stumbled upon an older device on our national ebay equivalent: A Nokia N9.

A little history: Nokia was great in the mobile phone market, but it took some wrong turns in the smartphone sector and got outcompeted. Microsoft played an active role in it - first they "partnered" with Nokia Mobile in 2011, later they took it over completely. It can be said to be a classical case of MS's "embrace extend extinguish" tactic. :(

Anyhow, just before these tragical events unfolded, they did some really good stuff - an open-source, Linux (and GNU, unlike Android) based operating system. And the N9 was the latest and greatest version of that, running MeeGo Harmattan.

So while I wasn't very serious about it at first, I soon realised that this device is very hackable, and alternative and current operating systems exist, as well as a community that is still active.

Following this article. The first step is to flash the firmware. Many of the file download links are gone! It comes down to this archive (there's also a torrent that downloaded quickly; I'm seeding it now). I also had to install the flasher tool, which is available as a package for my distro.

Now connect the phone and choose "Sync and connect".

Good. time to flash the firmware:

It's doing things for a few minutes, with Success. Now reboot:

Back to the main article. Next I have to connect to the internet and install a working repo mirror. Now I can enable developer mode, which needs to download & install 2 additional packages...
And so on.
Tweaks are available, Apps are available, but I'm not sure I want to continue using this operating system in its current state.

I'll have to read on, see how I can turn this into a familiar GNU/Linux installation. My main concern is being able to mount remote filesystems, like I can on my desktop/server combination at home. That will require a somewhat secure, true Linux, not an 8-years-out-of-date system with patches from all over the place (no disrespect).

For physical repairs, Nokia provided its customers with excellent hardware documentation, I have uploaded what I have here.

Next: Install another OS on a Nokia N9